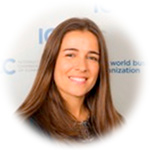 She received her law degree from the Universidade Católica Portuguesa. She is admitted to practice in Portugal. Her experience in international dispute resolution includes having worked in team with Juan Fernández-Armesto, founding partner of Armesto & Asociados, in more than 20 arbitration proceedings, including domestic and international, ad-hoc and administrative arbitrations and involving commercial, as well as construction and investment disputes.

In addition to Portuguese, her native language, she speaks English, Spanish and French.