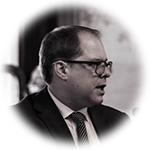 Permanent Court of Arbitration (The Hague)

At the PCA, he works closely with arbitral tribunals constituted under the auspices of the PCA to resolve investment treaty disputes, contract claims involving State entities and international organizations, and inter-State disputes arising under various international conventions and treaties. In particular, he handles matters involving Latin America and the Iberian Peninsula or where Spanish or Portuguese is a language of the arbitration. In addition, he assists the PCA Secretary-General in carrying out his roles under the Arbitration Rules of the United Nations Commission for International Trade Law (UNCITRAL), and is also regularly called upon to assist in the diplomatic work of the PCA with its Member States and other intergovernmental organizations.

He holds degrees in common law, civil law, and biochemistry from McGill University and is a member of the Barreau du Québec, New York State Bar, and Chartered Institute of Arbitrators. He speaks English, Spanish, French, and Portuguese.